How does dapivirine work?

As an NNRTI, dapivirine works by preventing HIV from replicating its genetic material after the virus enters a healthy cell.

What dosage forms of dapivirine are in development?

What is dapivirine’s clinical history?

Developed by Janssen Sciences Ireland Unlimited Company (formerly Tibotec Pharmaceuticals), part of the Janssen Pharmaceutical Companies, dapivirine was initially tested as an oral treatment for HIV in 11 Phase I/II clinical trials. In 2004, Tibotec granted IPM a non-exclusive, royalty-free license to develop dapivirine as a microbicide for use in resource-poor countries, and IPM began its work on the monthly dapivirine ring. This agreement expanded in 2014, when Janssen granted IPM exclusive worldwide rights to dapivirine.

Not yet, but IPM is working to obtain regulatory approval for the monthly ring in sub-Saharan Africa, where women have an urgent unmet need for new HIV prevention options. The ring received a positive opinion from the European Medicines Agency in 2020 and a recommendation from the World Health Organization (WHO) in 2021, which are expected to facilitate country regulatory approvals for its use. The product has also received WHO prequalification, a global quality assurance designation that will help guide national and global procurement decisions, pending approvals. IPM then began the first phase of regulatory submissions, with approval received in Zimbabwe and several other countries in eastern and southern Africa in 2021 and additional reviews underway in the region. Learn more about the positive EMA opinion, WHO recommendation, WHO prequalification and how IPM is planning for the ring's potential introduction.

How has dapivirine been tested in clinical trials?

IPM has studied the compound in 24 Phase I/II clinical trials in Africa, Europe and the United States. In all Phase I and Phase I/II studies, dapivirine was found to be well-tolerated, providing the basis for larger studies that were designed to study the efficacy and long-term safety of IPM's monthly dapivirine vaginal ring. In 2012, IPM and our clinical trial partner, the Microbicide Trials Network (MTN), launched parallel Phase III studies of the product.

In 2016, both Phase III studies found that the monthly dapivirine ring helped reduce women's HIV risk with no safety concerns. Two Phase IIIb open-label extension studies, DREAM and HOPE, were then launched that same year to provide former Phase III participants with the ring for one year. Results announced in 2019 found increased ring use and suggested greater risk reduction compared to the Phase III studies. Learn more about these results, additional ongoing and planned studies, and next steps for the ring.

Could dapivirine be combined with other ARV microbicide candidates?

IPM developed a vaginal ring combining dapivirine with the drug maraviroc, an ARV that targets the CCR5 receptor and works by preventing the virus from attaching to healthy cells. The dapivirine-maraviroc ring was the first combination ARV ring to reach clinical trials. IPM is also exploring combinations with other potent ARVs such as DS003 and darunavir.

Could dapivirine be combined with drugs that combat other health risks?

IPM is also developing a three-month vaginal ring that combines dapivirine with a contraceptive hormone called levonorgestrel. This multipurpose prevention technology could provide women with a single, long-acting product that simultaneously prevents against the dual risks of HIV and unintended pregnancy.

Where can I get more information? 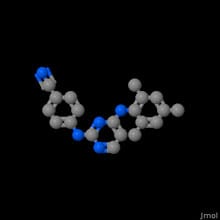