South Africa Approves Dapivirine Vaginal Ring for Use by Women

SILVER SPRING, Md. (March 11, 2022)—The nonprofit International Partnership for Microbicides (IPM) today announced that the monthly dapivirine vaginal ring received regulatory approval from the South African Health Products Regulatory Authority (SAHPRA) for its use by women ages 18 and older to reduce their HIV risk. This marks a major milestone that brings the first long-acting and woman-controlled product another step closer to reaching women.

“This approval is a positive step toward offering women more prevention options they can use to control their health on their own terms. We are delighted to continue celebrating International Women’s Day with this news for women’s HIV prevention and sexual and reproductive health,” said Dr. Zeda Rosenberg, IPM’s founder and CEO. “We look forward to collaborating with the South African government and partners to incorporate the monthly ring into the health system, and into women’s lives in South Africa.”

Women bear a disproportionate burden of the global HIV/AIDS epidemic, with nearly two-thirds of new adult infections in South Africa—and across sub-Saharan Africa—occurring among women. In South Africa, every week, nearly 2,700 women ages 15 and older acquire HIV. Expanding women’s HIV prevention choices so that they can choose the method that best meets their individual needs is critical to controlling the epidemic, and ensuring their sexual and reproductive health and rights.

“The Department of Health congratulates the International Partnership for Microbicides on the approval of the dapivirine ring by the South African Health Products Regulatory Authority for use by women 18 years and older,” said Dr. Zuki Pinini, Acting Deputy Director-General for HIV/AIDS, TB, Maternal and Child Health, National Department of Health, South Africa. “This is the first long-acting biomedical HIV prevention method that HIV-negative women will have a choice of, especially for those who find it difficult to take an oral pill daily or other HIV prevention methods. We look forward to working with the IPM to make the dapivirine ring accessible to women in South Africa.”

The monthly dapivirine ring could help fill a gap by offering women a long-acting HIV prevention product that they can control and use discreetly to reduce the risk of HIV transmission during vaginal sex. It will provide an important option for women who cannot or choose not to use higher efficacy products such as daily oral PrEP. Women insert the product themselves and replace it every month. Made of flexible silicone, the ring slowly releases the antiretroviral (ARV) drug dapivirine directly in the vagina at the site of potential infection, with minimal exposure elsewhere in the body.

IPM will support the National Department of Health and its partners to incorporate the dapivirine ring into its HIV prevention policies and programs, and with other next steps needed to make the ring available to women.

Two Phase III trials demonstrated the ring’s safety and efficacy. One trial, The Ring Study, was led by IPM in South Africa and Uganda, and the other, ASPIRE, was conducted by the US National Institutes of Health-funded Microbicide Trials Network in four countries, including South Africa.

IPM submitted its regulatory application for the dapivirine ring to SAHPRA through a collaborative registration procedure facilitated by the World Health Organization (WHO). The procedure accelerates national regulatory reviews for a product that has already received a positive decision from a stringent regulatory body such as the European Medicines Agency (EMA). The dapivirine ring previously received a positive EMA opinion through the EU Medicines for all procedure (EU-M4all; formerly known as Article 58) in July 2020, WHO prequalification in November 2020 and a WHO recommendation in January 2021.

“I’m grateful and delighted to hear that South Africa has the regulatory go-ahead,” said Dr. Linda-Gail Bekker, professor of medicine and deputy director of the Desmond Tutu Health Foundation, immediate past president of the International AIDS Society and national principal investigator for South Africa on The Ring Study. “I look forward to the next steps to see this wonderful HIV prevention choice in the hands of women all over South Africa as soon as possible.”

“I welcome South Africa’s regulatory approval of the dapivirine vaginal ring, a game-changer as an HIV prevention option for women,” said Dr. Tlaleng Mofokeng, UN Special Rapporteur on the right to health, distinguished lecturer at the O'Neill Institute for National and Global Health Law, and IPM Board member. “Access to medicines and commodities for HIV prevention is a fundamental component of the full realization of the right to health.”

“A proudly South African moment! I am grateful that SAHPRA has come to this decision based on the dapivirine vaginal ring’s potential benefit to women in our country alongside other available HIV prevention products,” said Dr. Thesla Palanee-Phillips, director of clinical trials, Wits Reproductive Health and HIV Institute, and protocol co-chair of the ASPIRE study and its follow-on, HOPE. “This decision speaks to SAHPRA’s commitment to addressing the urgent public health need for expanded choice and access to safe, discreet, woman-controlled HIV prevention options for women at substantial risk of HIV infection in an unrelenting epidemic in South Africa. I am humbled to see the ring may soon reach the hands of those who need it the most!”

“News of the dapivirine ring’s approval could not come at a better time for women in South Africa, and just a few days after International Women’s Day,” said Yvette Raphael, executive director of Advocates for the Prevention of HIV in Africa (APHA). “It will go down in history as revolutionary for women’s health. It is important that we do not forget the courage of the trial participants, and the resilience of advocates, their allies and communities. Womandla!”

IPM has applied for regulatory approval for the ring’s use in eastern and southern Africa, where women’s need for new HIV prevention choices is urgent, and plans to apply elsewhere in Africa in the future. In addition to being approved in South Africa, the dapivirine ring has also been approved in Zimbabwe. In countries where the dapivirine ring has not yet been approved, the ring is considered an investigational product.

IPM gratefully acknowledges support from the Danish Ministry of Foreign Affairs, German Federal Ministry of Education and Research (BMBF) through the KfW Development Bank, Irish Aid, the Ministry of Foreign Affairs of the Netherlands, UK aid from the UK Government’s Foreign, Commonwealth & Development Office, the American people through the US President’s Emergency Plan for AIDS Relief (PEPFAR) in partnership with the United States Agency for International Development (USAID), and the Bill & Melinda Gates Foundation.

About dapivirine: Dapivirine is a non-nucleoside reverse transcriptase inhibitor that acts by blocking HIV’s ability to replicate itself inside a healthy cell. IPM holds an exclusive worldwide license for dapivirine from Janssen Sciences Ireland Unlimited Company, one of the Janssen Pharmaceutical Companies of Johnson & Johnson. The license is designed to ensure that women in low-resource settings have affordable access to any dapivirine-based vaginal HIV prevention method.

About IPM: IPM is a nonprofit organization dedicated to developing new HIV prevention tools like the dapivirine ring and other sexual and reproductive health technologies for women and making them available in developing countries and other low-resource settings where the need is urgent. IPM has offices in South Africa, the United States and Belgium. Please visit www.IPMglobal.org. 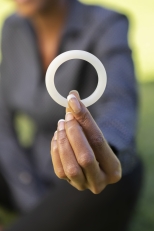