ARV-based microbicides work by targeting HIV at different phases in its life cycle.

The microbicide products IPM is developing do this in a variety of different ways:

Blocking the virus from entering the cell

The first steps of the HIV infection cycle, where HIV attaches to and enters the human cell, can be blocked with compounds known as entry or fusion inhibitors.

Blocking replication of the virus

Once HIV has entered the cell, the virus continues the process to reproduce itself. Early in this phase, viral RNA is copied into DNA using an enzyme called reverse transcriptase.

This viral DNA copy would then be integrated into the host cell DNA. Various ARV drugs are known to block reverse transcription, interrupting that process.

Also being researched are two additional ARV types for use as microbicides.

How HIV Infects a Cell » 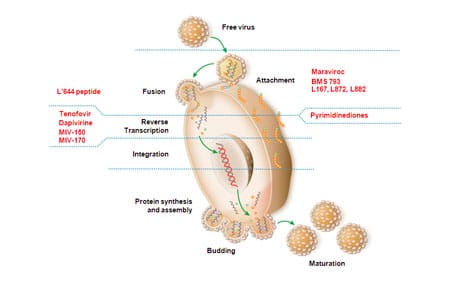