HIV/AIDS is the leading cause of death among women of reproductive age (15-44) in the world.

HIV/AIDS is also one of the leading causes of death for pregnant women and mothers, and is a major barrier to global efforts to reduce maternal mortality.

Unfortunately, women in developing countries often do not learn they are infected with HIV until they are pregnant and are tested as part of their antenatal visit. Research suggests that pregnant, HIV-positive women see the disease worsen during their pregnancies.

In fact, without HIV, the maternal mortality ratio in sub-Saharan Africa would fall an estimated 4 percent.1

Current strategies are not protecting women and families

Microbicides could support efforts to reduce maternal and child mortality, and help turn these statistics around:

How can microbicides help?

A safe and effective microbicide could provide women with a powerful and urgently needed new tool to protect themselves from HIV without limiting their choices to bear children.

Current HIV prevention methods such as condoms and abstinence are not realistic options for women who want to have families or who cannot persuade their partners to remain faithful or use condoms.

1 Trends in Maternal Mortality: 1990 to 2013. Estimates by WHO, UNICEF, UNFPA, The World Bank and the United Nations Population Devision.
2  Calvert C and C Ronsmans. “The contribution of HIV to pregnancy-related mortality: a systematic review and meta-analysis," AIDS 27 (2013): 1631-39
3 Karim SA. "State of the Art: Epidemiology and Access." Presented at International AIDS Conference 2014 .
4 UNAIDS, The Gap Report, 2014 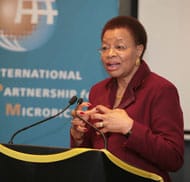