First long-acting HIV prevention method for women reduced infections by approximately 30% overall, with differences in efficacy by age and level of use; IPM to seek regulatory approval for investigational product

BOSTON (Feb. 22, 2016) — In an important scientific achievement for women’s health, two large Phase III clinical trials — The Ring Study and ASPIRE — have shown that a monthly vaginal ring containing the antiretroviral drug (ARV) dapivirine can safely help prevent HIV-1 infection in women. Developed by the nonprofit International Partnership for Microbicides (IPM), the monthly ring is the first long-acting HIV prevention method designed for women, who bear the greatest burden of the global HIV/AIDS epidemic. IPM plans to apply for regulatory approval to license the product.

The Ring Study, led by IPM, showed that the monthly dapivirine ring safely reduced HIV infection overall by 31 percent compared to a placebo. Similar results were seen in ASPIRE, led by the US National Institutes of Health-funded Microbicide Trials Network (MTN), which found that the ring safely reduced infection by 27 percent overall. This is the first time two Phase III studies have confirmed statistically significant efficacy for a microbicide to prevent HIV.

Notably, both studies saw important differences in efficacy by age and consistency of ring use, or adherence. ASPIRE showed that the ring reduced HIV risk by 61 percent in women older than age 25. A post-hoc analysis of that study showed a 56 percent reduction in HIV risk among women older than 21, who also appeared to use the ring more consistently overall. These findings were statistically significant and supported by a trend in The Ring Study, which suggested higher efficacy (37 percent) for women over 21.

Conversely, little to no protection was seen in women ages 18-21 across both studies — 15 percent in The Ring Study and no protection in ASPIRE. This underscores the urgent need to overcome barriers to HIV prevention for the youngest women. IPM and MTN are working to understand how ring use, and potential biological and other factors may have influenced the different levels of protection seen by age in these studies.

Results from The Ring Study and ASPIRE were announced today at the annual Conference on Retroviruses and Opportunistic Infections (CROI) in Boston, Massachusetts.

The Ring Study enrolled 1,959 HIV-negative women ages 18-45 at seven sites in South Africa and Uganda, and ASPIRE enrolled 2,629 HIV-negative women ages 18-45 at 15 sites in Malawi, South Africa, Uganda and Zimbabwe. ASPIRE began in 2012 and ended in 2015. The Ring Study also began in 2012, and is reporting results early after its independent data safety and monitoring board recommended the study proceed to final analysis.

Following guidance from the regulatory authority in South Africa, IPM will close The Ring Study’s placebo arm in that country and provide all women still enrolled with the active dapivirine ring for the remainder of their participation. IPM is seeking similar approval in Uganda.

“These findings give new hope to many women at high risk who need more and different options to effectively protect themselves from HIV,” said Dr. Zeda Rosenberg, founding chief executive officer of IPM. “IPM will seek regulatory approval for the monthly dapivirine ring and work with partners to determine its role in strengthening HIV prevention efforts. We are also hopeful we can learn more about how to help women who want to use the ring do so consistently, which could help increase protection. A planned follow-on study would help answer key questions about how women would use the ring when they are aware it can safely help offer protection.”

Our thanks go out to the women who participated in the studies, and their families and communities for their commitment to finding a solution to this devastating epidemic. IPM also extends its deepest thanks to the research teams that expertly conducted these multi-year studies, and to its donors and civil society partners for their investment of time and resources in women’s health.

The ring and why it is needed

The monthly dapivirine ring, which IPM developed over the past decade, is the first product to adapt a medical technology commonly used to deliver hormones to women — the vaginal ring — to the fight against HIV. The flexible ring is easy for a woman to insert herself and provides sustained-release of dapivirine locally to the site of potential infection during vaginal sex.

“I welcome the results from the ASPIRE and Ring Study, which investigated the extent to which the dapivirine ring protects women from acquiring HIV,” said South Africa’s Minister of Health, Dr. Aaron Motsoaledi. “Every advance in science that empowers women to protect themselves from the virus should be considered for rapid adoption and implementation.”

Women in sub-Saharan Africa remain at high risk for HIV despite global progress against the disease. Ending the epidemic will require multiple prevention options that meet women’s needs and fit within the context of their lives. IPM hopes the monthly dapivirine ring will join other new innovations such as oral pre-exposure prophylaxis (PrEP) as part of a comprehensive HIV prevention package, alongside continuing development of next-generation vaginal and rectal microbicides, long-acting injectables, vaccines and other strategies.

Dapivirine is a non-nucleoside reverse transcriptase inhibitor that blocks HIV’s ability to replicate itself inside a healthy cell. IPM holds an exclusive worldwide license for dapivirine from Janssen Sciences Ireland UC, one of the Janssen Pharmaceutical Companies of Johnson & Johnson (Janssen), which is designed to ensure that women in low-resource settings have affordable access to any dapivirine-based microbicide. Dapivirine is a highly potent ARV not currently used for HIV prevention or treatment that has been evaluated in more than 30 clinical trials.

Findings on efficacy and adherence

Both studies found the ring to be safe, with no statistical difference between the active and placebo arms. Previous IPM studies have shown that absorption of dapivirine is largely confined to vaginal tissue with low systemic exposure, which may help minimize side effects. The Ring Study and ASPIRE also found no evidence that use of the dapivirine ring increased the presence of ARV-resistant HIV.

As we continue to examine the data, we are also focusing on what more we can learn about the relationship between adherence and efficacy. Both studies used objective markers to measure adherence, including dapivirine levels in blood plasma and residual drug left in used rings of women in the dapivirine ring arms of the studies. Overall, adherence and, in turn, HIV protection, improved over time in ASPIRE. This finding was supported by a post-hoc analysis of The Ring Study exhibiting a strong trend toward higher efficacy in women who had less drug remaining in their used rings. Taken together, these data suggest that the ring must be used continuously to achieve protection — and that greater protection could be achieved with more consistent use.

“Women who volunteered for these studies live in communities with some of the highest rates of HIV in the world, and we saw that across women of all ages in both studies. Today, we have turned a corner in HIV prevention,” said Dr. Annalene Nel, chief medical officer of IPM and study director for The Ring Study. “We have seen the potential of an ARV ring, and must now work to fully realize this potential for women worldwide.”

“The vaginal ring delivers drug directly to the site of infection, with very low systemic exposure. This, along with the ease of use, could increase the ring’s appeal for many women,” said Sharon L. Hillier, Ph.D., of the University of Pittsburgh, and principal investigator of the MTN. “The ring could provide more options for women to reduce their own risk of HIV.”

Based on today’s results, IPM is pursuing the following steps:

“Scientific innovation harnessed for public good can produce important results,” said Paul Stoffels, chief scientific officer and worldwide chairman, Pharmaceuticals, Johnson & Johnson. “We believe that collaborations such as this one are a key element in the fight to improve global public health for individuals, families and communities worldwide.”

This is the first time a vaginal ring has been used to effectively deliver an ARV, and opens the door to next-generation prevention products. IPM is advancing a three-month dapivirine-only ring, another ring designed to prevent both HIV and unintended pregnancy, and combination ARV rings designed to increase efficacy.

Ring Study and ASPIRE results will be presented at CROI Wed., 24 Feb. and can be viewed online within 24 hours at http://www.croiconference.org/.  Find out more about IPM’s monthly dapivirine ring at www.ipmglobal.org. Find MTN’s release at http://www.mtnstopshiv.org/node/7229 and NIAID’s at http://www.niaid.nih.gov/news/newsreleases/2016/Pages/ASPIRE.aspx.

About IPM: IPM is a nonprofit organization dedicated to developing new HIV prevention tools and other sexual and reproductive health technologies for women, and making them available in developing countries. Our partnerships with public, private and civil society bring scientific ingenuity, political will and financial resources to bear on developing and delivering products designed to have significant public health impact. IPM has offices in the United States and South Africa. Please visit www.IPMglobal.org. 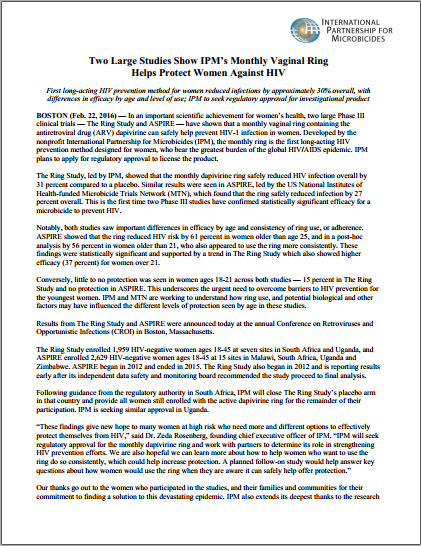