Dr. Rosenberg has been chief executive officer of IPM since its founding in 2002. From 1999 to 2002 Dr. Rosenberg was the scientific director for the HIV Prevention Trials Network at FHI. In that role she managed scientific and operational coordination for domestic and international clinical trials in the prevention of mother-to-child HIV transmission, sexual transmission, and intravenous drug use transmission.

From 1987 to 1999 Dr. Rosenberg worked in several capacities at the National Institute of Allergy and Infectious Diseases (NIAID) at the US National Institutes of Health (NIH). In her role as senior scientist at the Division of AIDS, she was responsible for HIV-prevention clinical trials in adult populations. As assistant director for prevention research, she coordinated prevention activities in the areas of HIV infection and other sexually transmitted diseases as well as tuberculosis. She represented NIH on the Public Health Service Task Force to Combat Multi-Drug Resistant TB and co-chaired the TB Research Subcommittee.

Dr. Rosenberg received her undergraduate degree (AB) in biology and mathematics from Douglass College, Rutgers University; a master’s degree (SM) in epidemiology and a doctoral degree (ScD) in microbiology from the Harvard School of Public Health. 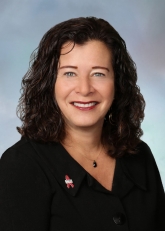