DURBAN, South Africa (July 18, 2016) — New data analyses announced at the AIDS 2016 conference today provide additional evidence suggesting that the monthly dapivirine vaginal ring developed by the nonprofit International Partnership for Microbicides (IPM) provides significant protection against HIV infection in women when used consistently. The new data were released as two open-label studies of the ring begin and as IPM pursues regulatory approvals for the product for its use in developing countries.

Earlier this year, results from two large Phase III clinical trials in Africa – The Ring Study, led by IPM, and ASPIRE, led by the U.S. National Institutes of Health-funded Microbicide Trials Network (MTN) – showed the monthly dapivirine ring safely reduced HIV-1 infection overall by 31 percent and 27 percent, respectively, compared to a placebo. In the new analyses announced by MTN today at AIDS 2016, researchers found that, among women who appeared to use the monthly ring consistently, HIV risk was cut by at least 56 percent — a statistically significant finding. Additional subgroup analyses of women who appeared to use the ring the most suggest the product reduced HIV risk by 75 percent or more.

Although the new exploratory analyses of ASPIRE need to be validated by further research, they indicate the important relationship between consistent ring use and HIV protection.

“We are encouraged by these new analyses, which further support that the dapivirine ring could be an important option for women who urgently need new tools to protect themselves from HIV,” said Dr. Zeda Rosenberg, founder and chief executive officer of IPM. “While IPM seeks regulatory approval for the ring, we will continue to work to understand how we can best support women to use it consistently, and advance research to expand women’s options with additional new methods that make sense for their lives and needs.”

Identifying HIV prevention technologies that meet women’s needs has been one of the biggest barriers to ending the epidemic. HIV continues to spread among women at alarming rates despite advances in treatment, particularly in sub-Saharan Africa where women account for nearly six of every 10 adults infected. The monthly dapivirine ring is the first microbicide and only long-acting self-initiated method shown to safely help reduce HIV risk in two large-scale efficacy studies. If approved, the dapivirine ring could expand women’s prevention options alongside the latest addition to the HIV prevention toolkit, the daily oral antiretroviral (ARV) pill Truvada,® also known as oral pre-exposure prophylaxis, or PrEP.

What’s Next for the Ring?

Based on results from The Ring Study and ASPIRE, and buoyed by the new data presented at AIDS 2016, the following steps for IPM’s dapivirine ring program are being pursued:

Launching DREAM and HOPE open-label extension “follow-on” studies: Two open-label studies of the dapivirine ring have just launched to determine when, why, and how women use the ring, and to develop effective ways to support its consistent use, or adherence. Called DREAM and HOPE, the studies will offer the active dapivirine ring to HIV-negative women who participated in The Ring Study and ASPIRE, respectively, and collect additional data on safety. Both studies will also provide a “real world” assessment of the ring, and gather additional information on the role of adherence on the product’s efficacy.

Crucially, these studies will help determine if dapivirine ring use will increase now that the product’s safety and efficacy are known. IPM is encouraged by PrEP open-label studies that showed increases in adherence and efficacy once participants understood that the product worked. Supportive counseling on ring use is a key feature of DREAM and HOPE, which will also assess the feasibility of participant follow-up visits at 90-day intervals to obtain the monthly rings.

IPM launched DREAM (Dapivirine Ring Extended Access and Monitoring) on 11 July, at the Qhakaza Mbokodo (QM) research center in KwaZulu-Natal, South Africa, a former Ring Study site. Additional research center sites in South Africa will be activated in the coming weeks, all of which participated in The Ring Study: Madibeng Centre for Research in Brits; the Maternal, Adolescent and Child Health (MatCH) in KwaZulu-Natal; Desmond Tutu HIV Foundation in Masiphumelele; and Ndlovu Care Group in Elandsdoorn, Limpopo. DREAM is also planned for one site in Masaka, Uganda, pending regulatory approval.

IPM’s regulatory submissions: As the ring’s regulatory sponsor, IPM is compiling all data collected on dapivirine and the ring through the Phase III program into a comprehensive dossier of evidence regulators require for product licensure, which it plans to submit in Q2 2017. If granted, first approvals for the ring could potentially come as soon as 2018 in some countries.

Pending analyses and research highlights: IPM’s full analysis of The Ring Study data is expected in Q3 2016, which may shed further light on the role of adherence on efficacy across all age groups. In addition, IPM will issue a report detailing the integrated data from The Ring Study and ASPIRE in Q4 2016, which may help address similar questions.

To that end, IPM is also partnering with MTN on a study (MTN-034/IPM 045) looking at the safety of, adherence to, and preferences for the dapivirine ring and oral Truvada® as daily PrEP among 300 young women and adolescent females ages 16-21 in Kenya, South Africa and Zimbabwe. Planned to begin in early 2017, the study also will examine if biological factors influence how the active drugs are absorbed in the body.

That product will soon enter its first clinical trial alongside IPM’s three-month dapivirine-contraceptive ring designed to prevent both HIV and unintended pregnancy. A Phase I clinical safety study is set to begin in Q3 of this year to assess two versions of the dapivirine-contraceptive ring as well as the three-month extended use dapivirine-only ring among 36 women in the United States. The study (MTN-030/IPM 041) will be conducted by MTN.

Other products in IPM’s pipeline combine dapivirine with other ARVs to potentially increase efficacy. IPM is also supporting early-stage clinical trials of dapivirine-based vaginal films, and of rectal gels for women and men to begin later this year.

“We are only beginning to see what’s possible when scientific ingenuity is focused on meeting women’s sexual and reproductive health needs,” said Georgina Caswell, IPM board member and Regional Programme Advisor at the International HIV/AIDS Alliance, a global partnership of civil society organizations dedicated to ending AIDS. “Policymakers, civil society, communities, donors, government and industry all have a role to play in ensuring that we maintain the momentum galvanized from dapivirine ring findings.”

About the dapivirine ring: IPM’s monthly dapivirine ring is the first vaginal ring shown to safely and effectively deliver an ARV drug to prevent HIV-1 infection. The ring provides sustained-release of dapivirine locally to the site of potential infection during vaginal sex with minimal absorption elsewhere in the body. Women insert the product themselves.

About the active ingredient: Dapivirine is a non-nucleoside reverse transcriptase inhibitor that blocks HIV’s ability to replicate itself inside a healthy cell. IPM holds an exclusive worldwide license for dapivirine from Janssen Sciences Ireland UC, one of the Janssen Pharmaceutical Companies of Johnson & Johnson, designed to ensure that women in low-resource settings have affordable access to any dapivirine-based microbicide.

About IPM: IPM is a nonprofit organization that developed the monthly dapivirine ring, and is dedicated to developing other new HIV prevention tools and sexual and reproductive health technologies for women, and making them available in developing countries. Our partnerships with public, private and civil society bring scientific ingenuity, political will and financial resources to bear on developing and delivering products designed to have significant public health impact. IPM has offices in South Africa and the United States. Please visit www.IPMglobal.org.

For comprehensive information on the ring and IPM’s work, visit http://www.ipmglobal.org/our-work/our-products/dapivirine-ring/phase-iii-results 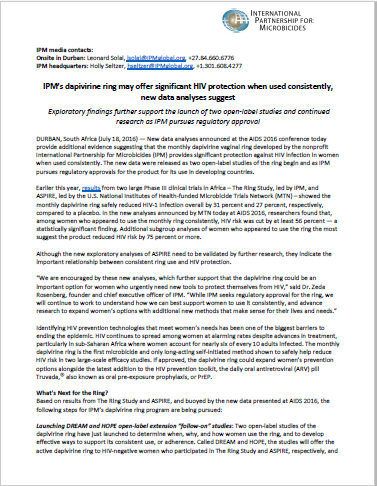