SILVER SPRING, Md. (May 3, 2017) – The nonprofit International Partnership for Microbicides (IPM) announced today the start of the first clinical trial of its three-month vaginal ring designed to prevent two of the greatest risks to women’s health: HIV, which disproportionately strikes women of reproductive age, and unintended pregnancy, a leading contributor to maternal mortality.

The three-month vaginal ring is designed to slowly — and simultaneously — release the antiretroviral drug dapivirine to prevent HIV and the contraceptive hormone levonorgestrel. The primary goal of the study, known as MTN-030/IPM 041, is to assess the ring’s safety and pharmacokinetics (how the body processes the two drugs). Results of the trial, including the product’s acceptability to women and their willingness to use it in the future, will inform next steps for the ring’s formulation and future trial designs.

“Women’s sexual and reproductive health needs do not exist in isolation, and neither should their prevention options. A long-acting product that gives women two prevention methods in one may be quite appealing,” said Dr. Zeda Rosenberg, founder and chief executive officer of IPM. “The only way to end the HIV epidemic is to offer women product options that meet their various needs, and IPM remains committed to making this a reality.”

Research indicates that such combined technologies may be widely used by women who wish to space their pregnancies and provide added protection against the threat of HIV. Currently, the only effective products that offer simultaneous HIV prevention and contraception are condoms, which must be used at the time of sex.

Led by IPM’s clinical trial partner the US National Institutes of Health-funded Microbicide Trials Network (MTN), MTN-030/IPM 041 will take place at two sites in the United States, the University of Alabama at Birmingham and Magee-Womens Hospital of UPMC, a teaching hospital affiliated with the University of Pittsburgh.

The Phase 1, randomized, double-blind study marks the first time a vaginal ring containing a combination of dapivirine and levonorgestrel will be tested in humans. IPM advanced the ring to clinical trials following preclinical safety assessments, and given the well-established clinical safety profiles of the drugs. Approximately 24 healthy women ages 18-45 who are not pregnant will be randomly assigned to one of two groups over a 14-day period: one group will use a vaginal ring containing 200 mg dapivirine and 320 mg levonorgestrel, and the other group will use a ring containing only 200 mg dapivirine for comparison.

The study’s primary aim is to evaluate the ring’s safety and pharmacokinetics through measuring levels of the two drugs in blood and vaginal fluid. The study will also assess product acceptability among women in the study. All women participating in the study will receive testing and counseling to reduce their risk of acquiring HIV and other STIs, including the provision of male condoms, and other health services. Results are expected in mid-2018.

Need for Multipurpose Prevention Products and New Tools for Women

As the two leading causes of death among women of reproductive age, HIV and maternal mortality are among the greatest obstacles to women’s health and development. Women are disproportionately affected by HIV/AIDS due to biology, gender inequities and sociocultural norms. In sub-Saharan Africa women carry nearly 60 percent of the HIV burden. UNAIDS has warned that current prevention strategies are not decreasing the rate of new HIV infections quickly enough to end the epidemic — and women, especially young women, are at the highest risk.

In addition, women in areas with high rates of HIV often have the greatest unmet need for modern contraception, imposing overlapping risks to their health. An estimated 225 million women of reproductive age in developing countries lack access to contraception, which often leads to maternal and newborn deaths and disabilities, largely due to complications during pregnancy and childbirth. Multiple studies have documented women’s interest in using discreet rings for HIV or multipurpose prevention, which could help keep women HIV-free and would allow them to space their pregnancies, leading to better health and economic outcomes for women and families.

IPM’s work is made possible through generous support from the Flanders Department of Foreign Affairs, Irish Aid, the German Federal Ministry of Education and Research (BMBF) through the KfW Development Bank, the Ministry of Foreign Affairs of the Netherlands, the Norwegian Agency for Development Cooperation (Norad), the United Kingdom Department for International Development (DFID), the American people through the United States Agency for International Development (USAID) through the US President’s Emergency Plan for AIDS Relief (PEPFAR), and the Bill & Melinda Gates Foundation.

About the active ingredients: Dapivirine is a non-nucleoside reverse transcriptase inhibitor that blocks HIV’s ability to replicate itself inside a healthy cell. IPM holds an exclusive worldwide license for dapivirine from Janssen Sciences Ireland UC, one of the Janssen Pharmaceutical Companies of Johnson & Johnson. The license is designed to ensure that women in low-resource settings have affordable access to any dapivirine-based vaginal HIV prevention method. Levonorgestrel is a type of progestin that is used widely for hormonal contraception and has a well-established safety profile.

About IPM: IPM is a nonprofit organization that developed the monthly dapivirine ring, and is dedicated to developing other new HIV prevention tools and sexual and reproductive health technologies for women, and making them available in developing countries. Our partnerships with public, private and civil society bring scientific ingenuity, political will and financial resources to bear on developing and delivering products designed to have significant public health impact. IPM has offices in South Africa, the United States and Belgium. Visit us at www.IPMglobal.org. 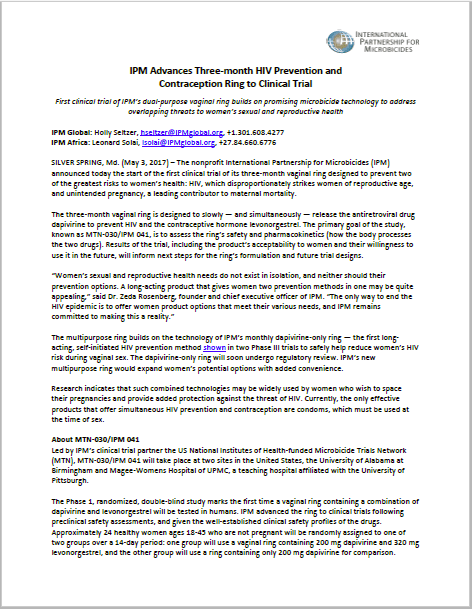