SILVER SPRING, Md. (Dec. 1, 2016) – The International Partnership for Microbicides (IPM) announced today that The New England Journal of Medicine (NEJM) has published results from The Ring Study, a Phase III clinical trial of IPM’s vaginal ring to prevent HIV. The study’s key findings, announced earlier this year, show that a vaginal ring that slowly releases the antiretroviral drug (ARV) dapivirine over the course of one month safely helps reduce the risk of HIV infection in women.

Published on World AIDS Day, today’s article is an important addition to the available data on the efficacy of the dapivirine ring to protect against HIV/AIDS, the leading cause of death for women of reproductive age worldwide. UNAIDS recently warned that current prevention strategies are not decreasing the rate of new HIV infections quickly enough to end the epidemic — and women are especially at risk. The dapivirine ring, developed by IPM, is the first long-acting, self-initiated HIV prevention method shown to work in two large-scale studies — IPM’s Ring Study and its sister study, ASPIRE, led by the US National Institutes of Health-funded Microbicide Trials Network (MTN).

The Ring Study data published in NEJM show the dapivirine ring safely reduced HIV infection by 31 percent overall among all women in the trial. This is similar to primary results seen in ASPIRE, published previously in NEJM. The ASPIRE data  also showed that HIV risk was cut by more than half in women over 21 and recent exploratory analyses presented in July show that among women who used the ring consistently, the risk of HIV infection was reduced by at least 56 percent. Subgroup analyses suggest the ring cut HIV risk by 75 percent or more with near-perfect use.

“The publication of the Ring Study data reinforces the growing evidence base about the ring’s safety and efficacy, and its potential role in HIV prevention,” said Dr. Zeda Rosenberg, founder and chief executive officer of IPM. “Women continue to become infected at alarming rates, especially in Africa, and need new options they can use to help protect their health.”

Next Steps for the Ring (see IPM’s short video to learn more):

About the dapivirine ring: The flexible silicone ring provides sustained-release of dapivirine locally to the site of potential infection during vaginal sex with minimal absorption elsewhere in the body.

About the active ingredient: Dapivirine is a non-nucleoside reverse transcriptase inhibitor that blocks HIV’s ability to replicate itself inside a healthy cell. IPM holds an exclusive worldwide license for dapivirine from Janssen Sciences Ireland UC, one of the Janssen Pharmaceutical Companies of Johnson & Johnson. The license is designed to ensure that women in low-resource settings have affordable access to any dapivirine-based microbicide.

About IPM: IPM is a nonprofit organization that developed the monthly dapivirine ring, and is dedicated to developing other new HIV prevention tools and sexual and reproductive health technologies for women, and making them available in developing countries. Our partnerships with public, private and civil society bring scientific ingenuity, political will and financial resources to bear on developing and delivering products designed to have significant public health impact. IPM has offices in South Africa and the United States. Please visit www.IPMglobal.org. 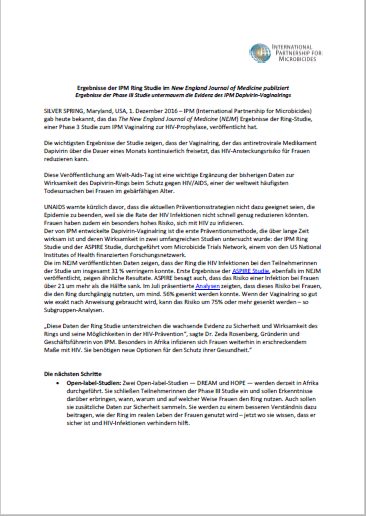 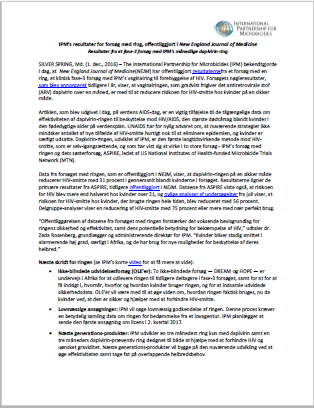