SILVER SPRING, Md. (July 13, 2017) — The nonprofit International Partnership for Microbicides (IPM) is pleased to announce that its application for the monthly dapivirine vaginal ring, designed to reduce the risk of HIV-1 infection via vaginal intercourse in HIV-negative women in combination with safer sex practices, has been validated and is now under review by the European Medicines Agency (EMA). IPM designed the ring, which releases an antiretroviral drug (ARV) called dapivirine over the course of one month, to offer a discreet and long-acting HIV prevention method for women, who insert and replace it themselves.

The application was submitted under a procedure called Article 58. This procedure allows the EMA, in cooperation with the World Health Organization (WHO), to provide a scientific opinion on the safety, efficacy and quality of medicines that would be marketed exclusively outside of the European Union — specifically in low- and middle-income countries — for diseases of major public health interest.

“This marks a major next step in IPM’s regulatory strategy to make the dapivirine ring available to women across sub-Saharan Africa who currently lack the range of tools they need to stay HIV-free,” said Dr. Zeda F. Rosenberg, founder and CEO of IPM, the ring’s developer and regulatory sponsor. “Ending the epidemic will only be possible when women can choose from multiple options that meet their needs, which may change throughout their lives. As the first long-acting product, the ring would be an important addition to a comprehensive prevention package.”

EMA conducts its assessment to ensure that products meet the same stringent standards as products intended for use in the European Union. The Article 58 process also involves representatives from the WHO and selected national regulatory authorities. Should the EMA grant a positive scientific opinion on the dapivirine ring, IPM will then seek WHO prequalification for the product, which many African national regulatory authorities consider when conducting their own product reviews. This may help facilitate approvals in regions where women face the highest HIV risk.

The application is based on the results of The Ring Study and ASPIRE, two independent, placebo-controlled Phase III clinical trials that assessed the ring’s long-term safety and efficacy in more than 4,500 women in Malawi, South Africa, Uganda and Zimbabwe. Data from 35 supporting clinical studies were also included in the dossier.

Made of a flexible silicone material, the ring contains dapivirine, a non-nucleoside reverse transcriptase inhibitor that blocks HIV’s ability to replicate itself inside a healthy cell. IPM holds an exclusive worldwide license for dapivirine from Janssen Sciences Ireland UC, part of the Janssen Pharmaceutical Companies of Johnson & Johnson. The license is designed to ensure that women in low-resource settings have affordable access to any dapivirine-based vaginal HIV prevention method.

"There is an urgent need for breakthrough innovations that can help stem the surge in HIV infection rates among adolescent girls and women in sub-Saharan Africa," said Jaak Peeters, Head of Global Public Health at Johnson & Johnson. "We are proud of our 15-year collaboration with IPM to advance the dapivirine ring toward a potential positive scientific opinion. We look forward to continuing our partnership as the ring proceeds through the review process, including work already under way to support delivery of the ring in sub-Saharan Africa in the future."

IPM also plans to submit applications to the South African Health Products Regulatory Authority (formerly the Medicines Control Council) in late 2017 and to the US Food and Drug Administration in 2018. Additional applications to national regulatory authorities in sub-Saharan Africa would follow.

Next Steps for Dapivirine Ring Research

While the ring undergoes regulatory review, IPM and its clinical trial partner, the US National Institutes of Health-funded Microbicide Trials Network (MTN), are conducting two open-label studies of the dapivirine ring called DREAM and HOPE, respectively, to provide the product to former Phase III trial participants, and to collect additional information about safety and how women fit the product into their daily lives. The DREAM study is also enrolling young women ages 18-25 who have never before used the product to provide insights into overcoming ongoing barriers to HIV prevention among this high-risk population.

In addition, IPM and MTN will begin a study called REACH later in 2017 to assess the safety of, adherence to and preferences for the monthly dapivirine ring and daily oral Truvada as pre-exposure prophylaxis (or PrEP) among young African women. Together, all of these studies will collect important insights into how to best support product use and inform the ring’s potential roll out.

HIV remains a leading threat to women’s health and well-being worldwide. Despite global progress against the epidemic, HIV/AIDS is the primary cause of death among women of reproductive age, and nearly 60 percent of new infections among adults 15 and older in sub-Saharan Africa are in women. Young women in that region are as much as three times more likely than young men to become infected with HIV.

IPM’s monthly dapivirine ring is the most clinically advanced vaginal ring to deliver an ARV for HIV prevention. To date, there are no long-acting HIV prevention products on the market; other long-acting formulations are in ongoing clinical trials. IPM is building on its ring technology to develop a suite of next-generation products, including a three-month dapivirine-only ring to offer women greater convenience and lower costs as well as a three-month dapivirine-contraceptive ring designed to prevent both HIV and unintended pregnancy. IPM is also developing rings that combine the potency of different ARVs that have not been used for prevention, which could increase overall efficacy and reduce the chance of acquiring drug-resistant HIV.

Learn more at the IAS Conference on HIV Science in Paris in July: IPM will deliver a symposium presentation on “Intra-vaginal rings for PrEP: What are the future prospects?” Mon., July 24, 11:25-11:35am CEST. IPM and its partners will present results from the pooled efficacy analysis of the Phase III dapivirine ring trials (MOLBPEC34) as well as several supporting ring studies, including a poster discussion presentation on “Breast milk dapivirine pharmacokinetics and estimated infant exposure during dapivirine intravaginal ring use among lactating women” Mon., July 24, 1:25-1:30pm CEST. IPM partners will deliver an oral presentation on the “Impact of microbiota on female genital tissue and plasma concentrations of dapivirine” Tues., July 25, 11:45am-12pm CEST and on a “Safety and acceptability trial of the dapivirine vaginal ring in US adolescents” Tues., July 25, 12:05-12:18pm CEST. See a full list of IPM-authored or -supported presentations at: http://ipmglobal.org/content/join-ipm-ias-2017

IPM’s donors: IPM’s work is made possible through generous support from the Flanders Department of Foreign Affairs, Irish Aid, the German Federal Ministry of Education and Research (BMBF) through the KfW Development Bank, the Ministry of Foreign Affairs of the Netherlands, the Norwegian Agency for Development Cooperation (Norad), the United Kingdom Department for International Development (DFID), the American people through the United States Agency for International Development (USAID) through the US President’s Emergency Plan for AIDS Relief (PEPFAR), and the Bill & Melinda Gates Foundation.

About IPM: IPM is a nonprofit organization that developed the monthly dapivirine vaginal ring, and is dedicated to developing other new HIV prevention tools and sexual and reproductive health technologies for women, and making them available in developing countries. Our partnerships with public, private and civil society bring scientific ingenuity, political will and financial resources to bear on developing and delivering products designed to have significant public health impact. IPM has offices in South Africa, the United States and Belgium. Visit us at http://www.IPMglobal.org. 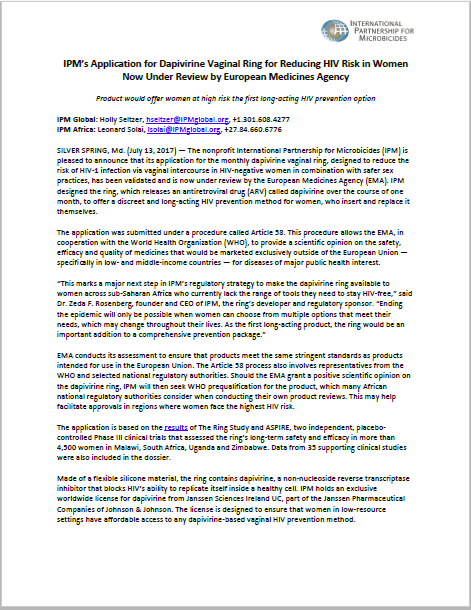